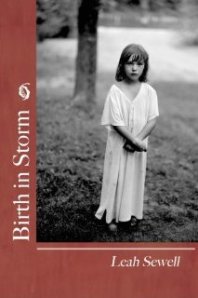 Leah Sewell uses the language of the plains, and of the body, to open a gulf in us—a gulf of memory, of disaster—whatever is precarious, all around us. These are storm poems in the best possible way, full of threat, but also centers of unsettling calm; that which we love, but can no longer reach. Someone leaves town forever; a child stubbornly grows up, and away; the weather turns, maybe for the worst, and we must ride it out.

Leah Sewell is an assistant editor at Coconut Poetry Press (Atlanta, GA), the art director of XYZ Magazine (Topeka, KS), founder and facilitator of the Topeka Writers Workshop and a mother to two youngsters. Her poetry has appeared in [PANK] Magazine, Rufous City Review, Weave Magazine, Flint Hills Review, Midwestern Gothic, Mochila, and other journals, and was nominated for a Pushcart Prize in 2012. She is a graduate of Washburn University in English with a minor in Women’s Studies and is an MFA candidate at the University of Nebraska.

Across rural landscapes that routinely produce tornadoes and hailstorms are stories of women weathering the winds of their own lives in Birth in Storm, a new poetry collection by Leah Sewell. An ever-present quiet that pervades the notion of small towns by no means indicates stillness, and Sewell’s tales of adolescent struggle and maternal strength spin every bit as strong and prevalent as nature’s storms.

The women narrating these poems often become swept up in new, but perhaps expected, roles, quietly settling into the molds of mothers, lovers, and teenage daughters. In “Escape by Wave,” a young girl imagines the sacrifice she would make in order to be a mermaid, claiming, “I’ll trade my ankles for mermaid hair.” An arcane fantasy spurred by an all-too-familiar adolescent low self-esteem, the poem takes an assertive turn when her made-up mermaid self determines, “In place of boys, I’ll ride the narwhals.” The poem “Fast Turn” is another vision of the tumultuous rides on which young women find themselves, and Sewell’s short lines and stanzas quickly carry the reader from one uneasy scene to the next.

Following the harsh weather of childhood is the transition into adult roles, and one such role Sewell writes about candidly and perceptively is that of motherhood. “Portrait of My Mother as a Young Womb” is an emotional portrayal of a woman becoming a mother, against the context of her previous experience as a daughter. The narrator carries the poem through dark descriptions of her mother’s husk-like womb to her own as she gives birth: “I moan / back to clarity & my daughter slips finally / from me – ship from port, / seed rubbed clean / from husk.” The universal journey from being a daughter to becoming a mother is succinctly tied together by Sewell’s recurring husk image.

Birth in Storm is a masterfully linked collection of poems that liken the unpredictability of natural disasters to the uncertainty of natural and inevitable human experiences. Sewell’s stories are often rich in specific detail, all while retaining an accessibility that grounds a perhaps unfamiliar setting with stories readers will feel as though they know — or have experienced themselves.

Storms abound in Birth in Storm, a chapbook by Leah Sewell. These aren’t the pleasant storms that make for quiet nights in of romance or contemplation. Sewell’s storms are violent and life-changing, their own force bent on destruction and re-creation. The poems of Birth in Storm all share this impending, kinetic energy. Through tightly controlled images and a quietly purposeful, authoritative tone, Sewell explores the journey from birth, to girlhood, to motherhood with an urgency that commands attention.

But Birth in Storm is not just a chapbook with poems about storms. Yes, her narrators often find themselves caught in the middle of tornados. But what are these storms that beset her poems; what are these storms that shape the women who survive them? What does a tornado mean to the young woman in “Tornado Drill” who “wore my backpack backwards, / so with cleaving textbook corners / & weight of sack lunch, / I was pregnant fleeing the great drone / of the tornado drill tornado”? What would this young girl have to say to the teenager in “Sister,” who, when left home alone at night, puts a stray kitten outside in the middle of a tornado? What does a storm mean to the mother in “Backyard,” who keeps one eye on her children and the other on a storm that “dressed in evening pink / unfurls & grows”? These storms become their own living beings, outward manifestations of the inner lives of the narrators.

Undoubtedly, the poems of Birth in Storm are powerful. Through a masterful control of image, bred by an imagination that runs wild, Sewell creates a world in which we can all slow down for a moment, consider not only the wonder of motherhood or the power of growing into a woman, but the urgent terror of it all. Birth in Storm is a collection in which the author asks us all to come inside the tornado with her, to enter the swirl of creation. Sewell asks us to consider the pull of the wind, the electric atmosphere, feel the braids and tendons that pull us along. Most importantly, she asks us to consider the power of creation within ourselves.

“I don’t know Leah Sewell–but I want to. Her first poetry chapbook, Birth in Storm, is every bit as tempestuous as its title promises. Leah’s poems deliver on everything that accompanies a natural disaster–the threat and the destruction, as well as the unexpected moments of calm before, and trailing in the storm’s wake. In Sewell’s poems–particularly in pieces such as “Alfalfa Child,” and the Pushcart nominated “The Crimson Lady”–nature and the physical self are the lens through with the poet examines all in our world which is uncertain, showing the reader how to uncover beauty amidst disaster. Sewell doesn’t shy away from the fierceness of the storms she chronicles in her collection, but instead guides the reader through the tense anticipation of an impending tempest, as well as provides them with quiet spaces where the process of cleaning up afterwards can be every bit as cathartic as coming through gale force winds alive. “Sister” is one of Birth in Storm’s most haunting pieces, one that will remain with the reader, visions of mewling white kittens and long-haired boys, each doomed in their own way and resigned to the storms looming on the horizon. Sexuality is menacing and unexpected as the storms outside, “risen/unexpected as a tumor,” in pieces such as “Boys,” and “Thirteen Tastes Like the Pantry Floor,” where Sewell invokes the reader to “taste your father’s cologne, sliver of soap taste, copper smell of your new woman-taste, sweat on your friend’s hand & spit-sister shake.” Birth in Storm leaves no one unscathed, but instead, stronger for having made it through. Sure, there’s broken glass everywhere and there’s a lot of work to be done, but somehow, the reader finds themselves looking forward to putting everything back together–because Sewell shows us that for poems born in storm, that which yields is not weak.”

~ Allie Marini Batts, ELJ Publications Author of You Might Curse Before You Bless

“Sewell has an impressive poetic voice, highly developed and consistent. The effect for me is a simultaneously feel of being comforted and alarmed, and the duality of that increases the impact of both for me and really makes me engage with the poems. I can’t say for sure that is what is intended, but that’s how I reacted and the effect is impressive regardless. In short, wonderful poems.”